“Domestic Transformations in Contemporary Africa: What Role for the Diaspora?” 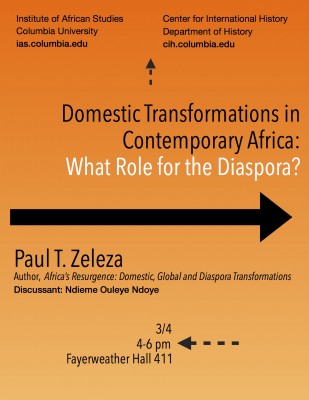 —Zeleza’s academic work has crossed traditional boundaries, ranging from economic and intellectual history to human rights, gender studies and diaspora studies. He has published more than 300 journal articles, book chapters, reviews, online essays and short stories. Topics include political, economic development and human rights issues as well as the impact of globalization on Africa, the continent’s relationships with its diasporas and the impact of the Obama presidency in terms of the diaspora paradigm.Zeleza won Africa’s most prestigious book prize, the Noma Award, for “A Modern Economic History of Africa” and “Manufacturing African Studies and Crises.” His recent books include “Barack Obama and African Diasporas: Dialogues and Dissensions” and “In Search of African Diasporas: Testimonies and Encounters.”He earned his bachelor’s degree from the University of Malawi and his master’s from the University of London, where he studied African history and international relations. He holds a Ph.D. in economic history from Dalhousie University in Halifax, Nova Scotia, Canada.